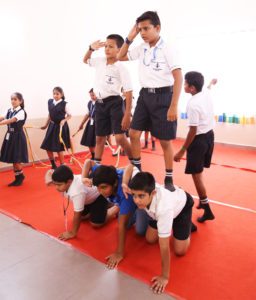 Community at school divided into 4 Houses

The entire school community starting from Nursery to Class X is divided into four houses. As part of the community divide and as per the house system, students take part in inter house competitions where the school’s houses compete as teams against each other in various events.

The main aim of dividing into houses is to propagate team spirit and give a competitive edge, along with the overall development of the individual

The school plans to have Students Council after the 1st term exams. The council would be formed from amongst the students. The elected council roles are important as they would be expected to set an example for younger children to embody the values that the school holds dear and to contribute to the wider community.

They would be expected to help the younger children, both in the classrooms and at playtimes. They would play a pivotal role on special days and themed weeks, assisting the staff and the House Mistress in their planned activities.
The Students Council would be elected by the management committee for the first instance and in the subsequent years by the students.

All the Captains would be provided with badges and sashes of the respective house colours.